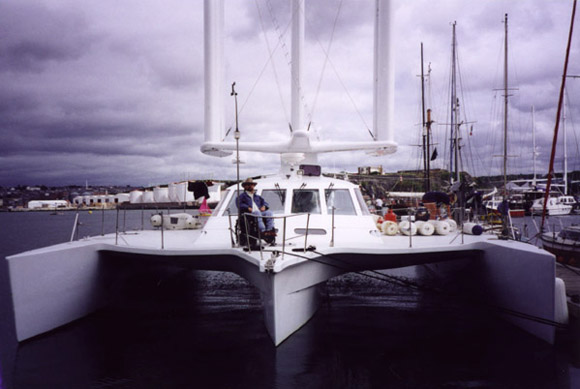 Inventure 2000
Davin and I met up met up with Trevor in Plymouth, England. Trevor is a former helicopter pilot with the British Navy. He became a quadriplegic as a result of a skiing accident. An avid sailor before his accident, Trevor wanted a way to continue sailing.

To that end, he designed a wheelchair accessible sailboat he named the Inventure, a 60 foot yacht that uses an airfoil wing propulsion system.
We went on a few sea trials with Trevor as he tested various controls on the Inventure. The system is very complex and requires further attention. It is never easy being the first at something.

That’s Trevor at the helm, his mum on the stern.

That’s Michal and me amidships. My brother, Mike, built some sea-legs for me. Those gray bars that stick out keep the chair from flipping over backwards. When my sea-legs are not in use, they flip up out of the way, allowing me to lean back against the cabin.

Notice, the switch to the left of the hatch. Trevor can operate that switch to open or close the hatch. That’s Dave in the hatch, checking out the airfoils. Between sea trials, Davin and I had fun with Trevor’s crew/friends. Louise is holding up a cup of hot tea for me as I relaxed, leaning back against the Inventure cabin, watching the fireworks. There were 2 nights of fireworks competition at the Plymouth Yacht Haven/ Mount Batten boat yard.

In these pictures, you can see the wheelchair lift on the port (that’s ‘left’ to you landlubbers) side of the ship.