August, 2000 This is the famous Treasury in Petra, Jordan. It is actually a tomb carved into rock. Notice the immense size. Laurence, on the right, hauled my butt all over Egypt and Jordan. This picture is here by popular demand (My mother asked me to put in, and we have to do what mom… 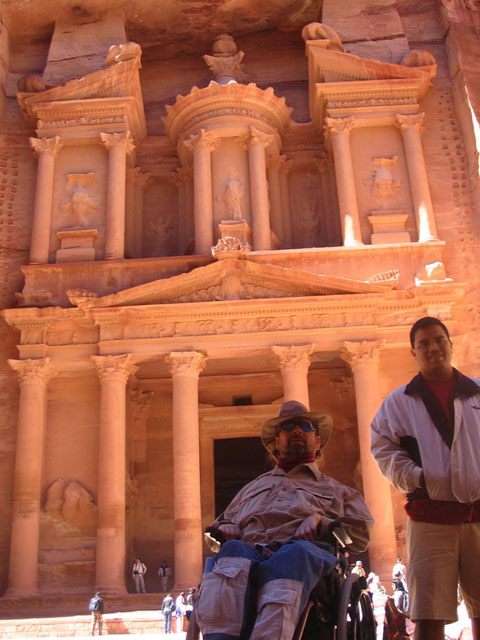 This is the famous Treasury in Petra, Jordan. It is actually a tomb carved into rock. Notice the immense size. Laurence, on the right, hauled my butt all over Egypt and Jordan.

This picture is here by popular demand (My mother asked me to put in, and we have to do what mom says). I like that it shows me on a camel but the people in the Treasury are barely noticeable. In order to get a proper perspective of the immense size of the Treasury, you really need to see the people – but I do like that camel.

To reach the ancient Nabatean city of Petra, visitors travel on horseback, on foot, or by horse-drawn carriage through the Siq, a winding, one-kilometer-long fissure in rose-red sandstone cliffs over 300 feet high. At its end, the Siq emerges into a sunlit canyon surrounded on all sides by magnificent cliffs into which the Nabateans carved hundreds of temples, tombs, burial chambers, dining halls, baths, staircases and other amazing structures. The site had all its water piped in through clay water channels you can still see in the Siq. When Romans captured the site, they built more temples and a Roman theater seating 3,000. If you saw Indiana Jones and the Last Crusade, you will recognize Petra as the site where the final scenes were filmed.

The exact age of Petra is unknown, however, some scholars say it was mentioned in the Old Testament, making it over 2,000 years old. The Greek and Roman architectural influence confirms this.

It is hard to imagine creating a city by carving it into rock 2,000 years ago.

Since the “Afterlife” was more important than life, tombs were much more elaborate than homes, which were also carved into the rock.

While in the Holy Land, I learned how to make Holy Water. You start with regular water and just boil the Hell out of it.

While in Petra we stayed at the Hotel Hedab. One of the owners, Sa‘ed, was very, very helpful.
He told me that is father had a stroke and was paralyzed like me until he passed away.

Sa‘ed had a spa in the hotel. It was complete with steam room, massage table and lounge.

This was our tour guide (on the far left), Naiym of Petra. He is an excellent guide. He can help book hotels and with tours in other areas of Jordan. He is also a great photographer and took some of these pictures. Email him at naiym@cyberia.jo

This is Mohamed. He drove us from Petra to Amman. He only spoke a few words of English but his expressions and gestures spoke volumes. He explained to me that his father had a stroke and was paralyzed and that he had provided care for him.

On the edge of the Arabian Desert, nestled away in the mountains south of the Dead Sea, Petra was the glittering capital of the Nabataean empire of King Aretas IV (9 B.C. to 40 A.D.). Masters of water technology, the Nabataeans built their city with great tunnel constructions and water chambers that carried drinking water into the city and reduced the chance of flash floods. A theater held an audience of 4,000. Today, the Palace Tombs, with the 42-meter-high (137-ft-high) Hellenistic temple facade on the El-Deir Monastery, are impressive examples of Middle Eastern culture. Petra, which means “stone” in Greek, has survived through the ages because almost all of its “buildings” were carved out of solid rock walls. It is perhaps the most spectacular ancient city remaining in the modern world. To the north, the remains of a 9,000-year-old city make Petra, like Jericho, one of the earliest known Middle Eastern settlements.

First a fortress city, Petra became a rich commercial center. Control of key trade routes brought Petra its fortune and produced monumental temples, tombs and administrative buildings. After the Romans annexed Petra in 106, its position as a commercial hub slowly weakened. The city may have housed 20,000-30,000 people during its heyday under the Romans, but, by the end of the Byzantine Empire (ca. 700), the hydraulic system and once-gracious buildings were almost ruins. For the following centuries, Petra disappeared from most maps and became a legend. In 1812, Swiss traveler Johann Burckhardt snuck into the city disguised as a Muslim and shared his story with the world. Much of Petra’s fascination comes from its setting on the edge of Wadi Araba, part of the Great Rift Valley.

The rugged sandstone hills form a deep canyon easily protected from all directions. The best access to Petra is through the Siq, a winding, often narrow valley which suddenly opens upon the most impressive of Petra’s monuments, al-Khazneh (“the Treasury”). Carved out of the mountain and over 40 meters (131 ft) high, it was a royal tomb—but legend says that pirates hid their treasure there, hence “the Treasury.” The main god of ancient Petra was Dushara, who was worshipped in the form of a black, rectangular stone, along with Allat, the chief goddess of the ancient Arabs. Worshipping sites can be seen at various points in Petra, and there are many open places of sacrifice marked by altars.

The picture below is from our guide, Naiym.