Davin and I met up met up with Trevor in Plymouth, England. We stayed in the Barbacan area (picture above). Trevor needed a few more days to work on his yacht so we headed for Bath, via Bristol. Davin is an expert driver with an excellent sense of direction, so I just sat back and enjoyed the scenery. 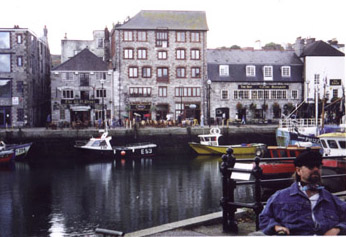 Bath is a wonderful place to visit. We saw the Roman Baths (above) which date back to the 4th century A.D. The Romans built a roof over their Baths, which kept direct sunlight out. Since then, the Baths were abandoned, fell into disrepair, were again discovered and reclaimed. However, the roof was not rebuilt, exposing the Baths to sunlight, causing algae to flourish.

We saw many castles and cathedrals in the UK. They were all marvelous examples of great architecture.

We got to Scotland during the Fringe Festival. We were told it is the largest festival in the world.

Here we have the Tantallon castle.

These are the Edinburgh castle in Scotland.

After Edinburgh, it was off to North Berwick for the Highland games. In addition to the hammer throw, kaber toss, and shot-put, they had competition for various bagpipe groups.