Sharm el Sheikh is a resort town on the Egyptian Sinai peninsula. It’s a great place to dive the Red Sea. We stayed at the Camel Dive Hotel. 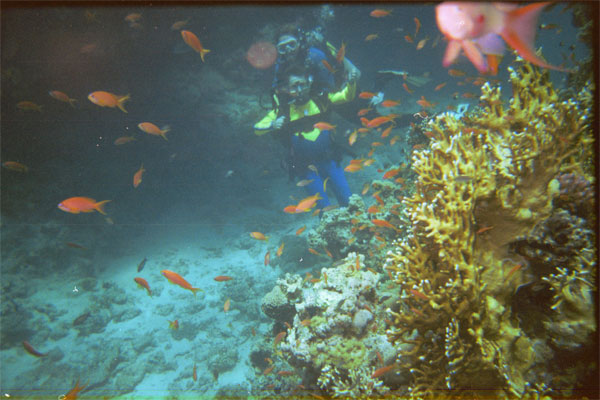 Hey, who stole my fins?

It would be easier to see if these fish would get out of my way.

That’s a Lion fish. They get over a foot long and are a pleasure to watch.

This close up of a lion fish was taken from the Camel Dive site.

These were my dive buddies – Thorston (from Germany) on the left and Manuel (from Portugal) on the right. They both spoke several languages, as did all the staff there. These guys were great – they genuinely cared about helping me. I felt very comfortable diving with them. I highly recommend them and Camel Dive Club.

This was one of the spice shops in Sharm el Sheikh. The importance of spice as a commodity can not be overstated as a key element in the expansion and development of civilization. As just one of many examples, salt enabled preservation of food which enabled long journeys which enabled exploration which enabled discoveries of new lands.

Learn more about trading spice in ancient times by reading about the Silk Road. Also, see my note about the spice monopoly on my Egypt page.

We hired a driver to drive us several hundred miles to Cairo. It was a bargain at only $120 dollars for the 2 of us – much cheaper than flying. A bus would have been much cheaper but not as comfortable.