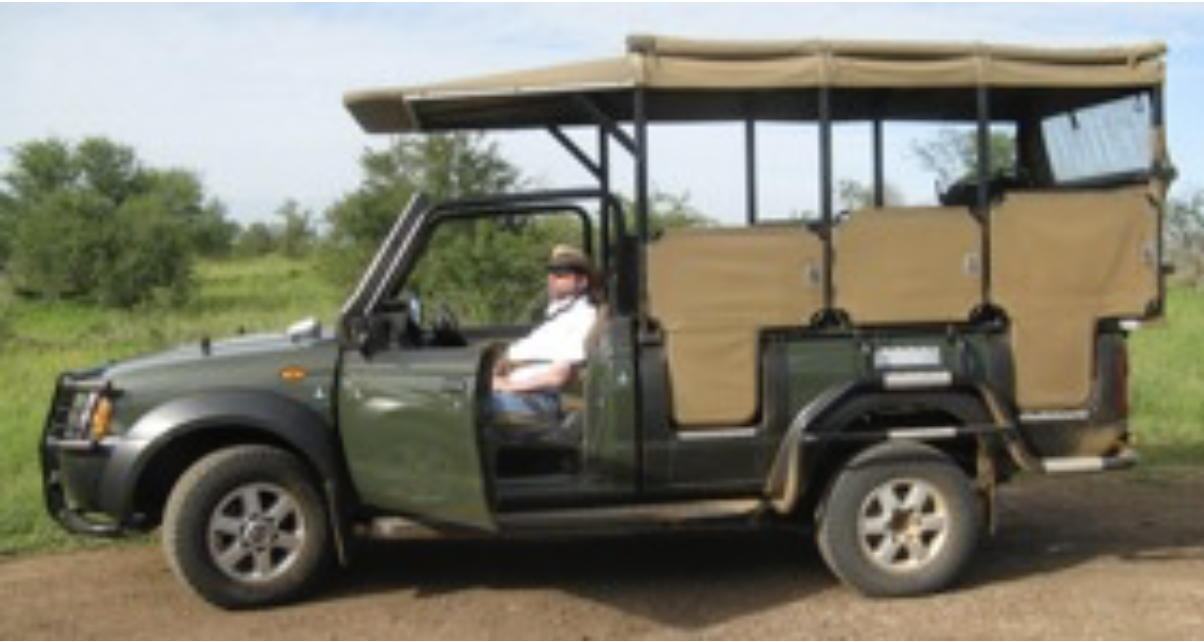 We flew to Johannesburg, caught the City Bug Mini-bus to drive to Nespruit. From there, Craig, our guide with Nkomazi Safaris (www.nkomazisafaris.co.za), took us to stay at Grand Kruger Lodge (www.grandkrugerlodge.co.za/). What a great place! It was next to the more than 7,000 square mile Kruger National Park. Both Nkomazi Safaris and Grand Kruger Lodge provided outstanding service and I highly recommend them. Lelanie, of Nkomazi Safaris, worked closely with us to fit our safari into our itinerary rather than just offer non-negotiable dates and set activities like other companies.

We stayed in a very comfortable bungalow. Meals were served in the main lodge. They had a world class chef there that always prepared the best meals. All the staff were friendly and helpful. Craig told us not to go out after dark as 2 men were eaten by man eaters a couple of years ago. We were also told that after dinner in the main lodge, we should have a security guard walk ahead of us to our bungalow, shining his flashlight on the path. When we asked why, we were told this is to scare off snakes. I asked what kind of snakes they had and Craig said, “We have black mambas, green mambas, puff adders, spitting cobras….about a dozen in all.”

This guy above is a wart-hog, the preferred food of leopards. They like to live under the bungalow porches be- cause they know leopards are afraid of man – well, not all leopards. Craig told us two weeks before we got there a leopard killed a wart-hog under a porch and made a horrific sound.

Each morning we were awakened at 4am and gathered into the truck (photo on front page), to leave the lodge at 4:30am while the temperatures were cool and animals were feeding. Since we left the lodge so early each morning, it was still cold so they passed out blankets to passengers.

Our guides were very knowledgeable and had keen eyesight. We saw herds of animals as well as individuals in the grasses. We also saw other animals, including crocodiles, but we didn’t get photos of all animals.

Above is the King of the beasts – the lion. We also saw a female lion that looked wounded. Perhaps she was gored by a cape buffalo when she tried to kill it. Also there is a monkey and her baby. We saw many monkeys with their babies clinging to them. Above is an African elephant which can be distinguished from an Indian elephant by its large ears shaped like the African continent, and rounded back. Below, are giraffes. That dark colored giraffe is a male, the other a female.

In addition to the day Kruger Park trips, we scheduled a sunset drive. We saw great herds of animals then. Above, we see one of the many herds of animals sometimes mixed with other herds – in this case zebras and bucks.

Did you know that there are five living species of rhino? The two African species are the White Rhinoceros and the Black Rhinoceros. The main difference between black and white rhinos is not their color – it’s the shape of their mouths. White rhinos have broad flat lips for grazing on grass and black rhinos have long pointed lips for browsing on bushes. The name White Rhinoceros was actually a corruption of the word wijd (wide in Afrikaans) because of their square lips. These bad boys can weigh as much as 8,000 pounds and can live up to 35 years in the wild. Though rhinos are dangerous, the hippo is the most dangerous African animal.

The hippo is extremely aggressive, un- predictable and unafraid of humans, upsetting boats sometimes without provocation and chomping the occupants with its huge canine teeth and sharp incisors. Most human deaths oc- cur when the victim gets between the hippo and deep water or between a mother and her calf. The hippo spends much of the day in the water but doesn’t eat until its on land in the evening. The name hippopotamus literally means “river horse” from the Greek (hippos=horse and potamus=river).

Zebras are black or dark animals with white stripes and their bellies have a large white blotch. The stripes act as a camouflage mechanism. The vertical striping helps the zebra hide in grass. At first that seems silly considering that grass is neither white nor black, but it is supposed to be effective against the zebra’s main predator, the lion, which is color blind. A zebra standing still in tall grass may not be noticed at all by a lion. Additionally, since zebras are herd animals, the stripes may help to con- fuse predators – a number of zebras standing or moving close together may appear as one large animal, making it more difficult for the lion to pick out any single zebra to attack.

That yellowish bird is a weaver. When- ever someone would leave a lunch table, these birds would swoop in to clean up the left-overs.

We saw so many animals it was hard to keep track of the names of all of them. Perhaps you can name them.

On the left is Stanley who worked at Kruger Lodge. Stanley is Zulu. One day we were talking and I told Stanley I have traveled in 40 countries. He said, “We should call you Sizwe (pronounced seas-way). It means one who visits many nations.

Do you know what bio fuels are? Our guide taught us about bio fuels. The price of sugarcane has gone up since it was identified as a source for bio fuels. As a result, much of it is grown around Kruger Park. Unfortunately, sugarcane fields attract many rodents, which in turn, attract many poisonous snakes, which in turn take a toll on human life. The fields also require huge amounts of water, which is pumped from rivers, which lowers water tables, which concentrates crocodile populations, which eat more people.

We were told, beforehand, that December is NOT the best time to come on safari as the temperatures can be very hot and all the new green foliage may hide the animals. To make a long story short, we had hundreds of wildlife photos, as wildlife were easy to see. We also had perfect weather.