Our adventure began with a 2- hour road trip to from Santa Fe to Socorro, New Mexico. Our destination was Box Canyon, 6.5 miles beyond Socorro. 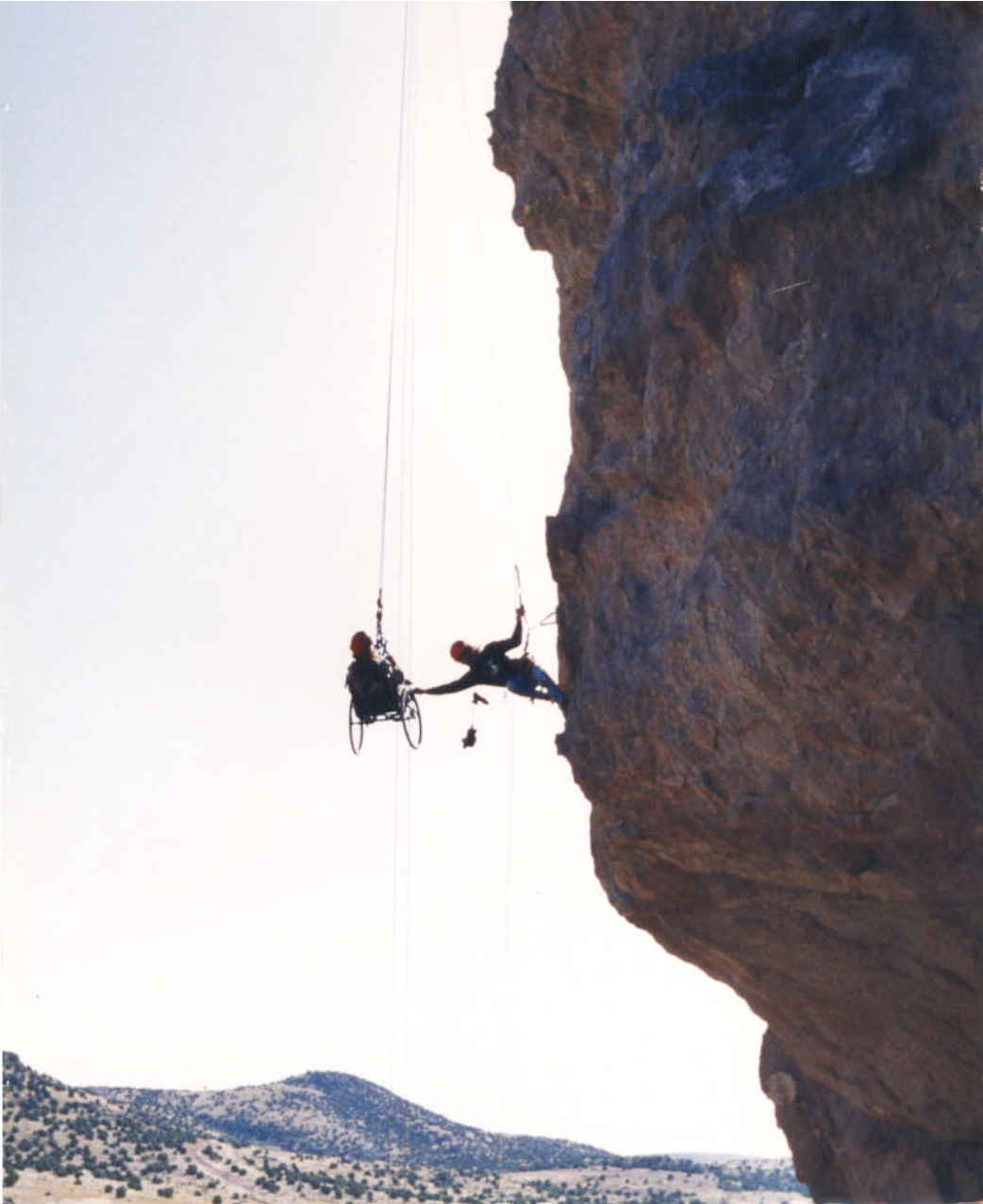 Our adventure began with a 2- hour road trip to from Santa Fe to Socorro, New Mexico. Our destination was Box Canyon, 6.5 miles beyond Socorro. We got off the hi-way and drove on a dirt path to get to the bottom of the canyon. Jason lifted me out of the jeep and into my wheelchair. He turned me towards the cliff. It was more than a rock wall, it was a 13-A. Cliffs are rated by their difficulty to climb, with 1 being the easiest, 14 the most difficult. They are additionally rated A – C. A is not as difficult as C. Ratings help climbers decide which cliffs they could climb. This would be a very difficult climb.

Jason explained the procedures to me. He had custom made a harness for my wheelchair. Jason and his crew put a body harness on me as a backup in case the chair harness gave way. I was carried up a narrow trail to the base of 13A.
The ropes from my harness were fed through a carabiner secured to the top of the cliff. Nothing was left to chance. Every rope, every carabiner, every strap was checked and re-checked.
All the slack was taken out of the rope. I began my ascent. Every time the ropes were pulled from below, the pulley above would creak and groan under the strain. With each pull on the haul line I moved straight up and, for the briefest of moments, seemed to be weightless. As the rope lost its slack I regained my equilibrium and prepared for the next haul. It wasn’t long before I reached the peak. The wind whistled through my hair as I enjoyed the spectacular view over 120 feet above ground. I felt privileged to be sharing an experience known only to other climbers, people who have the same reverence for nature, danger, and the element of uncertainty ever present in this type of activity.
While dangling from the top of the cliff I remembered the words of Helen Keller, “Security is mostly a superstition. It does not exist in nature, nor do the children of men as a whole experience it. Avoiding danger is no safer in the long run than outright exposure. Life is either a daring adventure or nothing.”

Fun Fact
Jason and his crew used carabiners as pulleys to hoist me up the face of the cliff just as the Romans used cranes to lift heavy objects 2,000 years ago.
In the picture below, a man in a treadmill helps turn a giant wheel as part of this human-powered crane. Using simple pulleys, a person can lift an object much heavier than him or herself.
Using several pulleys makes it even easier.