Peru is a South American country famous for its Inca ruins. The most famous of which is Machu Picchu. Nestled high in the Andes, it wasn’t discovered until 1911. Now it has become the object of my quest. I planned on going to Peru in February. Since it is south of the equator, it was… 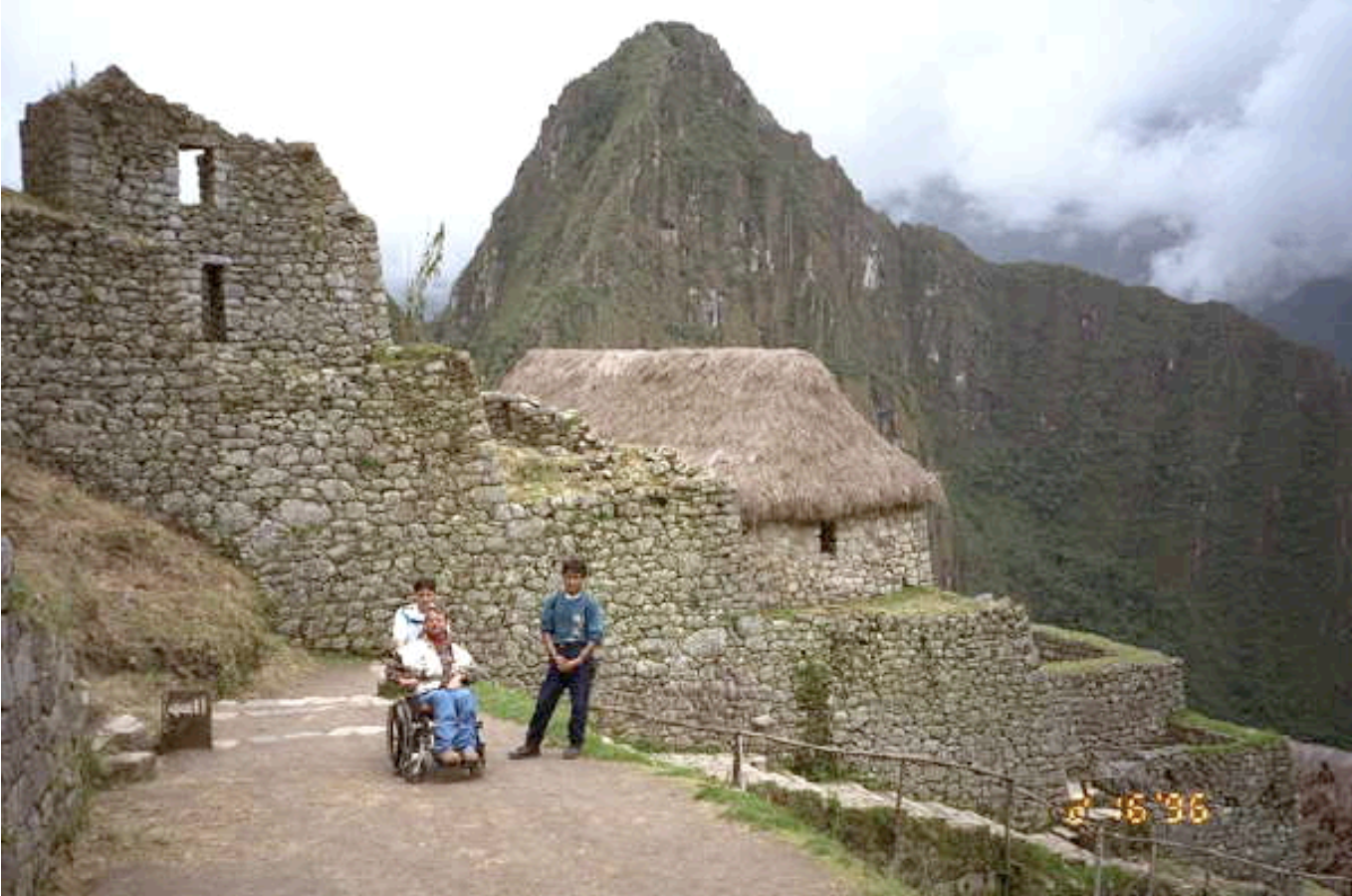 Peru is a South American country famous for its Inca ruins. The most famous of which is Machu Picchu. Nestled high in the Andes, it wasn’t discovered until 1911. Now it has become the object of my quest.

I planned on going to Peru in February. Since it is south of the equator, it was summer there. But because of its altitude it would be cool. The guidebooks said I should also expect wet weather.

Since I became paralyzed from the shoulders down, as a result of a cliff climbing accident, I would be totally dependent on help from others. My friend Jeff agreed to go with me and he invited his dad, Don. Don’s bad back prevented him from helping as much as he wanted so we looked for porters to help us. Wearing winter clothes, in a heavy wheelchair, I became a formidable 180 pound piece of rolling luggage with an attitude. Jeff would have to push and carry me over various terrains, in cool, sometimes cold and wet weather while fighting the effects of high altitude and fatigue.

Jeff and I were prepared for curbs, steps and in general, a complete lack of access. However, we weren’t prepared for altitude sickness in Cusco. Cusco is about 3326 meters (about 11,000 feet) in elevation. Jeff and Don felt severe symptoms yet I was not affected at all, perhaps because I had lived in the mountains of New Mexico for many years, or perhaps because I wasn’t expending any energy. Jeff and Don drank some mate de cocoa, hot tea made from the infamous coca plant, but that didn’t seem to help. When a 73 year old Cusco resident, Hernan, learned of our problem he offered to help. We all laid in our respective beds with our shirts pulled up. Hernan then rubbed some type of herb all over our chests. “Peru ?! What was I thinking?”

Rosa’s husband, Lucio, came with her to take us on a tour. Rosa asked Lucio to help push me around. He readily agreed. His enthusiasm was infectious. Lucio was strong enough to lift me in and out of his car, by himself, with ease. Lucio was almost too enthusiastic. Despite the difficulty, he wanted to push me everywhere. I eventually said, “Espera, Espera! Esta bien aqui.” (Wait, wait. It is good here). He pushed me all over Sacsayhuamán, the site of the annual festival of Inti Raymi. Here, there are huge walls made of stone blocks. Some of the stone blocks weighed several hundred tons yet they fit together so tightly that it is impossible to fit a knife blade between them.

Lucio wasn’t available the following day so instead our agent found a strapping 15 year old, Edgar, to assist me at the giant terraces at Ollantaytambo and other Inca ruins. Edgar didn’t speak English but we managed in spite of that. I brought a pocket translator with me but somehow the mouthstick that I use to type with broke. For various reasons I couldn’t find a suitable replacement. This became quite frustrating later when I wanted to ask Edgar about himself and his family.

Machu Picchu was next on our list of sights to see. We took a train from Cusco to Puente Ruinas. I had some apprehension about the train trip as I knew I would have to sit, for 3 1/2 hours, in a train seat which is very uncomfortable and could potentially be the beginning of a “bad chair day”. It was bad enough to sit in a “one size fits all” train seat, concentrating on my trunk balance in order to stay upright, but to be without my wheels was to give up the freedom of mobility. True, I couldn’t go anywhere on the train in my chair but still, I felt odd without it.

In Puente Ruinas we hooked up with porters from nearby Aguas Caliente. My porters, Alex 19 and Jaime 17 did not speak English and I only spoke enough Spanish to ask simple questions and to give simple instructions including left, right, forward, up, and stop. Jeff, showed them how to tilt the wheelchair back to go up and down steps (sounds simple but I was almost dumped out of my wheelchair several times by well meaning but untrained help). We then loaded up on a bus and headed to Machu Picchu. After a 20 minute ride on a narrow, bumpy, dirt road we finally reached an impasse. We disembarked from the bus and positioned ourselves at the base of a very long, steep set of steps which led up to the next level of road, the only way around the landslide. Jeff just looked at me and said, “Peru ?! What were you thinking?”

I had traveled to many other countries and was carried over various obstacles including over foot bridges, out of and into dingies from tall sailing ships, up escalators and more stairways than I can count. Alex and Jaime, however, had never carried me or anyone else in a wheelchair and I was anxious to see them carry out their duties. The steps we needed to ascend were narrow, steep and irregular. Jeff grabbed the back, Alex and Jaime the front and away we went. Part way up, another tourist, realizing our need for help, got in back with Jeff. Don kept busy by keeping a photo journal of our mini-sojourn.

After a lot of huffing and puffing we made it to the top. I was pleasantly surprised to find a utility truck there. The driver spoke no English but he motioned us to his truck. It was quite a sight, Jeff, Alex, Jaime and several other folks lifting me while still in my chair, up into the truck, the bed of which must have been 4 feet high. By giving us a ride to the ruins they saved us a 2 kilometer walk and gave Alex, Jaime and Jeff a well-deserved rest.

Upon reaching the ruins several new volunteers materialized to unload me. It seems, in other countries, that my wheelchair acts a magnet to attract helpful people. They often appear when I need help most and disappear before I get the chance to thank them. I fondly remembered the time I sat by myself on a plaza in Vera Cruz, Mexico. It began to rain; a little boy appeared, seemingly out of nowhere, pulled me under the protection of an archway then disappeared all without saying a word. Sometimes though, it is downright scary when strangers try to help me. When I was in Africa I traveled by dugout canoe to a village built entirely on stilts over the water. As we approached a lattice of poles they used for a dock, our guide told them I would need help getting out of the canoe. As the natives rushed to grab me I feared they would certainly swamp the boat. My fear, as it turns out, was unfounded.

On several occasions we came upon narrow, winding steps that were difficult to ascend. Alex and Jaime insisted that they could carry me by themselves and didn’ t need anyone else to help. They, like most teenagers, thought they were invincible. I felt helpless, not being able to bark out orders in Spanish to direct hem how best to carry me. I eventually acquiesced in their methods and hoped to avoid an “out of chair” experience. I became more comfortable with each new obstacle conquered. One particularly challenging obstacle involved making a hairpin turn up a set of uneven steps bounded by nothing but a flimsy old tree limb railing. If anything, the railing compounded our task as the wheelchair had to tilted back far enough for me to duck under while turning uphill. I kept my “spokes crossed” hoping I wouldn’t have to come back the same way.

I longed for the Sherpas I met in Nepal. I hired them to carry me on their backs in a wicker basket called a doko. The doko worked so much better than using my wheelchair. Each Sherpa could walk at a brisk pace with me on his back. They exuded confidence with their cat like grace and balance. They carried me up and down the mountains, steps, over logs on the trails, and across foot bridges without giving any indication that what they were doing required an extraordinary effort.

Alex and Jaime pushed and carried me all over Machu Picchu on trails that would make a mountain goat dizzy. Their hearts would swell with pride as they pointed to and named the wonders that surrounded us. I didn’ t understand enough Spanish to appreciate what they said but always nodded approvingly. I tried to get Alex and Jaime to use my pocket translator but we found some of their spelling to be unacceptable by the translator. Perhaps it is just as well. That piece of electronic technology couldn’ t convey the emotions and excitement Alex and Jaime seemed to be expressing.

The rest of the trip paled in comparison to Machu Picchu. Don suggested I write about our experience. He began to recite all of our uncomfortable, sometimes humorous, sometimes embarrassing incidents. Curiously, the only things I remembered were the incredible scenery, the wonderful people we met, and the amazing culture we were privileged to embrace. “Peru ?! I new all along what I was thinking.”

Fun fact: Incas invented freeze dried potatoes. They mashed the potatoes and left them in the sun to dehydrate. When all the water was evaporated the potatoes could be stored for months. 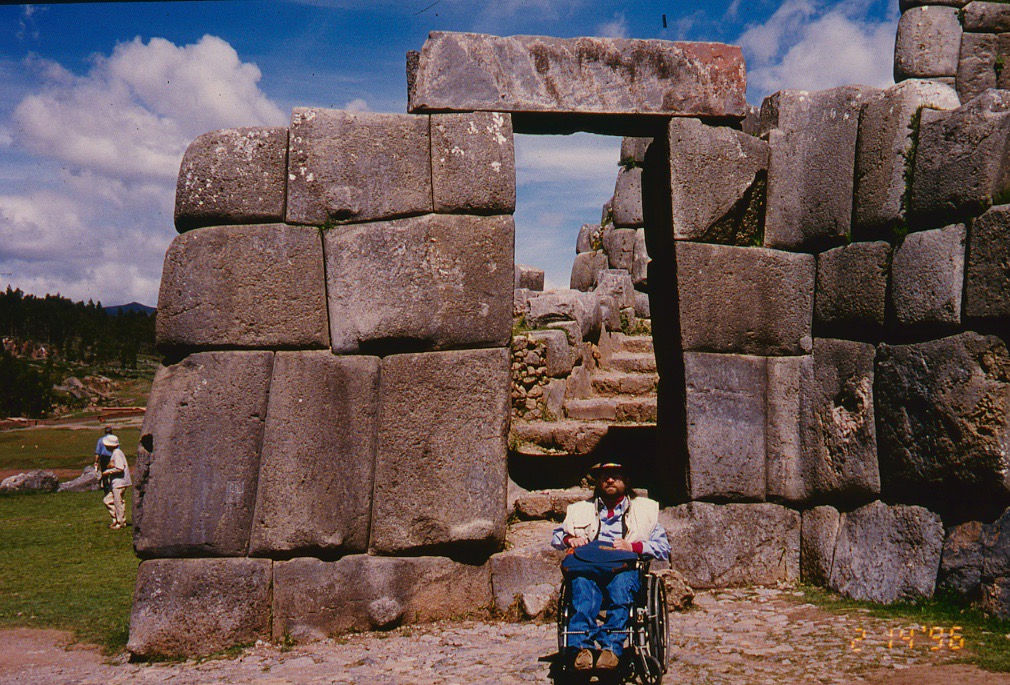 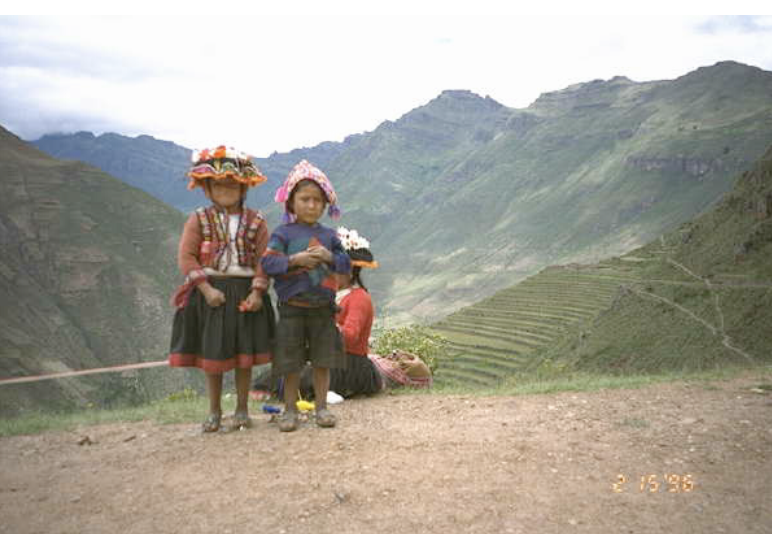 Riddle:
A man was returning from the market in Peru with a fox, cuy (a guinea pig eaten as a delicacy), and a bag of chicken feed. On the way home he had to cross a river. There was a rickety old bridge across the river. To cross the bridge, he had to hold the handrail with one hand and carry one of his belongings with the other hand. This way he could carry only one item at a time. If he carried the fox across first, the guinea pig would eat the chicken feed. If he carried the chicken feed across first, the fox would eat the guinea pig. How did he manage to carry everything across the bridge?