by Rudyard Kipling
(written for his 13 year old son)

If you can keep your head when all about you are losing theirs and blaming it on you,

If you can trust yourself when all men doubt you,

But make allowance for their doubting too;

If you can wait and not be tired by waiting, Or being lied about don’t deal in lies, Or being hated don’t give way to hating, And yet don’t look too good nor talk too wise:
If you can dream-and not make dreams your master;

If you can think and not make thoughts your aim;

If you can meet with triumph and disaster and treat those two imposters just the same;

If you can bear to hear the truth you’ve spoken twisted by naves to make a trap for fools, Or watch the things you gave your life to broken, And stoop and build ’em up with worn-out tools:
If you can make one heap of all your winnings and risk it on one turn of pitch-and-toss, And lose, and start again at your beginnings and never breath a word about your loss;

If you can force your heart and nerve and sinew to serve your turn long after they are gone, And so hold on when there is nothing in youExcept the will which says to them: “Hold on!”
If you can talk with crowds and keep your virtue, Or walk with Kings-nor lose the common touch,

If neither foes nor loving friends can hurt you,

If all men count with you, but none too much;

If you can fill the unforgiving minute with sixty seconds’ worth of distant run, Yours is the Earth and everything that’s in it, And-which is more-you’ll be a Man, my son!

The Men That Don’t Fit In

There’s a race of men that don’t fit in,

A race that can’t stay still;

So they break the hearts of kith and kin, And they roam the world at will.

They range the field and they rove the flood, And they climb the mountain’s crest;

Theirs is the curse of the gypsy blood, And they don’t know how to rest.
If they just went straight they might go far;

They are strong and brave and true; But they’re always tired of the things that are, And they want the strange and new.

They say: “Could I find my proper groove, What a deep mark I would make!”

So they chop and change, and each fresh move is only a fresh mistake.
And each forgets, as he strips and runs with a brilliant, fitful pace, It’s the steady, quiet, plodding ones who win in the lifelong race.

And each forgets that his youth has fled ,Forgets that his prime is past, Till he stands one day, with a hope that’s dead, In the glare of the truth at last.
He has failed, he has failed; he has missed his chance; He has just done things by half.

Life’s been a jolly good joke on him, And now is the time to laugh.

He is one of the Legion Lost; He was never meant to win; He’s a rolling stone, and it’s bred in the bone; He’s a man who won’t fit in.

The Winds Of Fate

One ship drives east and another drives west
With the self-same winds that blow;
‘Tis the set of the sails
And not the gales
That tells them the way to go.

Like the winds of the sea are the winds of fate
As we voyage along through life;
‘Tis the set of the soul
That decides its goal
And not the calm or the strife. 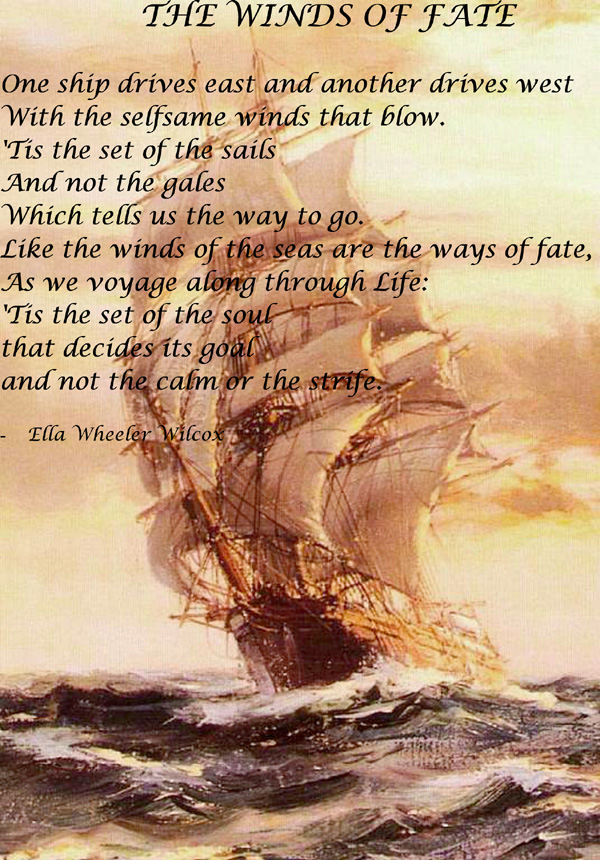 Things to Think About
Favorites